The first obstacle was, oh boy, how do we go about doing a show inside people&rsquo;s homes, get in and out smoothly, and keep it all safe and sound. We overcame this by choosing shows that were lo-fi and low impact in their presentation, with maximum two performers. - Michael Brown - Rock Surfers Theatre Company

In 2014 the team behind Rock Surfers Theatre Company decided to do something a little different for the Art & About festival in Sydney. Rather than put on performances in a theatre, they took to the lounge rooms of ordinary Sydney-siders with a series of intimate shows. We speak to Rock Surfers Executive Director, and Armchair Apocalypse Producer Michael Brown, about the logistics of tackling such a complex task...

How did the Armchair Apocalypse concept come to be?

To quote an excerpt from a Sydney Morning Herald interview with Phil:

‘… Spencer said he wanted to break down the idea that theatre only happened at the Sydney Theatre Company.

‘"You don't have to have a shirt and tie to go to the theatre," he said.

‘Spencer pointed to a history of living room theatre in continental Europe, calling it "the most pure, simple way to connect with an audience".’

Could you tell us about the people involved?

The brainchild of the project, Rock Surfers Artistic Director, and the project’s Creative Producer Phil Spencer – also a key performer in the program.

Phil graduated from a Theatre Degree at the University of Glasgow in 2007; where he was a founding member of F.W.A.M. Theatre collective, a company dedicated to creating devised performance. Since this time, Phil has worked professionally as a writer, actor, director, festival director and creative producer in the UK and Australia.

Kristal Maher is an arts, festival, logistics and event management specialist with ten years’ experience in festivals and arts management from major events such as Sydney Festival First Night as Program Coordinator, to arts events such as Underbelly Arts Festival for emerging artists, and is is currently Public Programs Manager at Sydney Harbour Federation Trust.

Phil performed his storytelling show You and Whose Army?

How did you go about selecting the locations?

Here is how we pitched to the people of Sydney to let us into their homes, to bring over a bunch of strangers and perform a show in their lounge room for a night:

It’s easier than hosting a dinner party – you have the space, but we do the work. But first, you and your venue have to tick a couple of prerequisites. You need:

1. To be located within City of Sydney LGA, the hub of Art & About.

3. To own the house and have home owners insurance (or if owned by family, e.g. parents, you will have direct written permission to host this event).

4. A sense of humour, adventure and readiness to welcome some guests into your home for an hour to share in some good art

We received online registrations, and spent a lot of time communicating with potential hosts. We met with them in person at their homes, and as soon as they agreed, we locked it in.

What were the costs involved?

In terms of the costs of delivering the project, the project was commissioned by Art & About, bolstered by funding from Rock Surfers Theatre Company.

Given the vast scale of the project, in relative terms Armchair Apocalypse was delivered very efficiently, and all of the dollars were in the right places.

The biggest costs were fees for the performing artists to write, develop and perform their works, as it should be.

The production and logistics support to the project was the other main cost and included Stage Managers, Producers, a few props here and there, plus bits and pieces to turn lounge rooms into pop-up theatres – cushions, stools, balloons and lots and lots of chalk for marking our street corner meeting point locations.

The marketing budget for the project directly was next to nothing thanks to the voluminous exposure provided by Art & About through the festival’s printed program, website, social media channels. Plus Armchair Apocalypse really struck a chord with media and received some great coverage on Radio National (twice), in Sydney Morning Herald, a Spectrum feature, Arts Hub and now Creative Spaces!

What were the resources available to you?

The most valuable resource to Rock Surfers Theatre Company in delivering Armchair Apocalypse was the expert Art & About team under the leadership of Gill Minervini, Creative Director at City of Sydney.

The expanse of knowledge and assistance offered by the team, in particular Program Manager Simon Walkom, was lifesaving and kept Armchair Apocalypse from being apocalyptic for us. They were there for us at every challenge. This team was key in spreading the word about the project and finding locations, assisting with production logistics and risk management, and the publicity side of things was huge thanks to them.

What were the obstacles and how did you overcome them?

The first obstacle was, oh boy, how do we go about doing a show inside people’s homes, get in and out smoothly, and keep it all safe and sound. We overcame this by choosing shows that were lo-fi and low impact in their presentation, with maximum two performers. We assessed physical risks (stairs, sharp corners etc) at every location, and minimized or eliminated them. And we had an excellent stage manager Nina Juhl who oversaw our efficient and tidy entry and exit from every location.

The next obstacle was actually getting people to hand over their houses for the night. This began very slowly, there were lots of questions naturally, and we lost a few leads early on. We overcame this by using these lost leads to clarify the information we were putting out to prospective hosts, we spread the word much further once media started picking up, and ultimately we got people excited about the shows we were going to bring to their homes. Once all of this took effect, we had more locations than we had shows for.

What were the risks?

The risks were many, but on the whole, were not grave risks. There was a very very big risk assessment matrix completed.

The risks (and their inherent complexity) were almost entirely idiosyncrasies of each locations, ‘slip and trip’ knocks, slippery stairs, sharp furniture corners an audience member might knock themselves on. We minimized or eliminated these risks for example by moving furniture, or making alternative routes if a driveway was slippery, that kind of thing.

Moving patrons around in a city location, one of the biggest risks was for pedestrian safety. We set meeting points for audiences nearby to locations, and placed these on the same side of the street as the venue. This eliminated the need for road crossings. We communicated road safety messages to patrons in advance with their email confirmations, and again on show nights when they arrived and departed.

And to make sure nothing was nicked (nothing was), location owners packed away their valuables, and limited access to other areas of the house. Owners, performers, stage managers and ushers all were briefed and played the role of keen eyes for any inappropriate audience action, and there was none at all because the audiences were great.

How was the program received and what are your future plans for utilising unusual spaces?

Armchair Apocalypse was received with acclaim and joy by the household hosts, audiences, the participant artists, its creator Art & About, City of Sydney, and the media attention given to the program was exceptional.

As far as utilising unusual spaces, Rock Surfers Theatre Company is Waverley Council’s Resident Theatre Company at Bondi Pavilion on Bondi Beach, and back at HQ every year we take over every nook and cranny of Bondi Pavilion for the annual Bondi Feast winter festival, so that will be back in spaces of all shapes and sizes in July 2015.

In March 2015, away from Bondi headquarters, we have two shows on the road as part of Spectrum Now. Shabbat Dinner is on at the Rocks Pop-Up in George St, and Shotgun a ten-minute monologue performed for three passengers in a car, is playing at The Domain as part of The Playground for Spectrum Now.

Thinking of presenting your own work in an unusual place? Talk to someone who has! Rock Surfers would love to hear from you and share their learnings. Contact Michael on michael@rocksurfers.org, tweet at @RockSurfers, or find Rock Surfers Theatre Company on Facebook at facebook.com/RockSurfers. 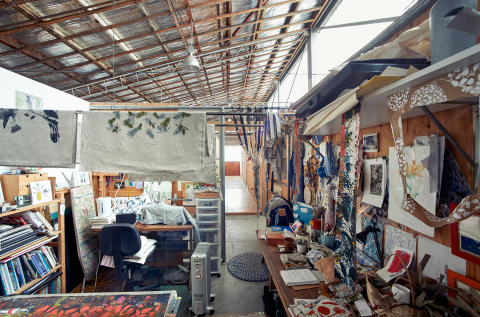